The basis of the KOISHI restaurant’s a la carte is composed of original and contemporary European cuisine combined with Asian elements.
For eight years, the chef Petr Pučík ruled the kitchen only to be replaced by his long-time sous-chef Martin Babica in mid-2017 who took over the imaginary rudder of a restaurant focused on contemporary fish cuisine and Euro-Asian fusion. But even he eventually handed over his scepter and chef Tomáš Dolníček currently reigns in the kitchen. An integral part of the Koishi gastronomic mosaic is a Japanese sushimaster.
First-class ingredients are the cornerstones of our philosophy. However, the fine dining is a mosaic of many other qualities without which we can not imagine the services we offer.

born in Bratislava in 1966 to a Slovak father and a Moravian mother, a bon vivant – but with a strong social and community consideration, a restaurateur  – but an occasional fast food lover, a Doors Revival Band Brno singer – but a keen fan of The  Beatles, having grown up on their music, devoted to the Zbrojovka team – but an orthodox fan of Manchester United, a wine connoisseurs  – but six beers in the renown  Blahovka pub can only be beaten by the six beers in the renown Blahovka pub…

He strongly dislikes: coloured football boots … (those should be black and only black), having to borrow the hose pipe at the petrol stations – both with or without the deposit (- it is so undignified!!!); TV commercials for chilled chicken (those simply do not belong there!); pro-Sparta commentators of the football league matches (it is, to say it simply-heinous).

He likes eating oysters and making soups of all kinds. Thanks to his absolute taste recognition memory he was one of the first Brno residents to have received a certificate of the Association of Sommeliers of the Czech Republic in 2004 as one of the first among the Brno citizens.

Ever since it’s establishment the restaurant has been ranking at the top places in the Maurer’s Grand Restaurant  Selection.

1st place awarded in 2013in this independent selection of the best restaurants in Czechia – GRAND RESTAURANT 2013.

2016 and 2017: KOISHI restaurant was awarded the 1st place in the selection of the best restaurants GOURMET BRNO.

2010 -KOISHI restaurant as awarded the Certificate  of the Tokyo  Association  of Sushi-masters as an enterprise with high standards of quality of the ingredients, the meals and the services.

The concept and the physical appearance of KOISHI originated almost two years. But Janko Martinkovič began playing with an idea to open his own business decades ago. His dream dot clearer outlines in 2006 when he found an ideal place for his plan in emerging gourmet district on Údolní Street. 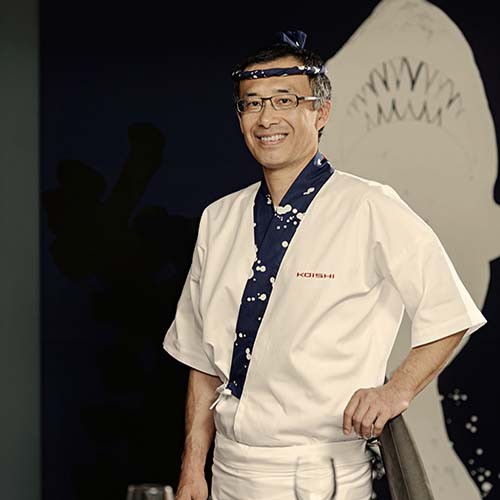 With all due respect to the local sushi, I recommend everyone to try the second dimension of the menu. Unreal! Excellent harmony of pure tastes, Kambala with beef cheek, Zander with blood sausage, Jerusalem artichoke soup, coconut curry soup, unbelievable desserts – gastronomic top.
Rostislav Křivánek - post on FB